The ‘Peacemakers’& the American Civil War 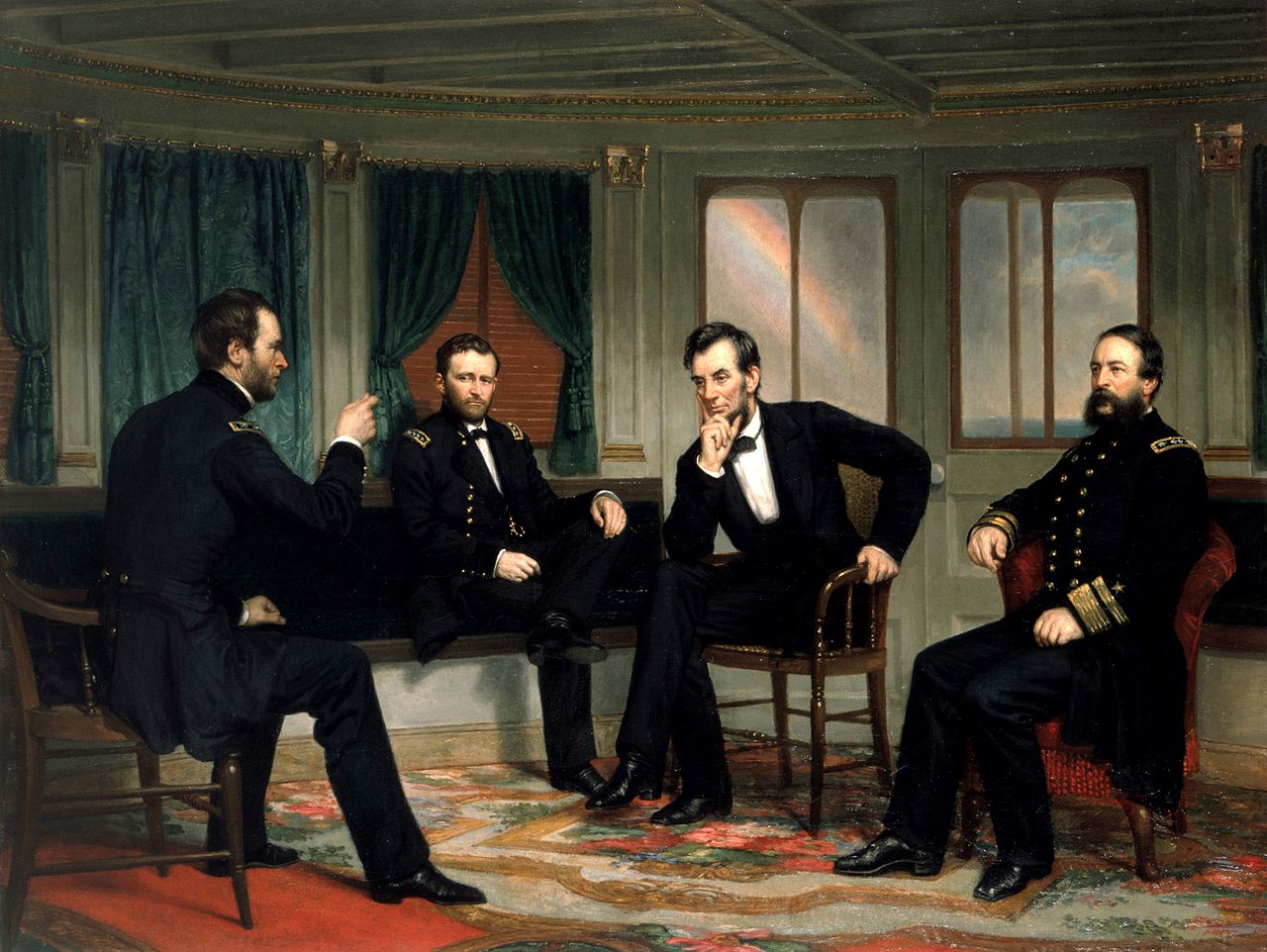 Though not wartime propaganda per se, and hardly a cartoon or comic, George P.A. Healy’s 1868 work The Peacemakers, painted three years after the American Civil War, employs design elements that seem to borrow from cartoon/comics archetypes that developed through that period and that set this work apart from other Civil War era high art. The rainbow over President Lincoln’s head is the most eye-catching icon.

The Peacemakers tells the story of a game-changing strategy session between the North’s three heavy hitters — (left-to-right)  Major General William Tecumseh Sherman, General-in-Chief Ulysses S. Grant, and President Abraham Lincoln—  to determine whether to seek peace or continue engagement with the south’s Confederate Army (led by General Robert E. Lee).  The outcome of this meeting laid the groundwork for the Yankee victory and Sherman’s total war campaign to pacify Georgia and the Carolinas — (an unfortunately common route to ‘peace’). (Peacemakers, 2016)

Considering the post-war context within which The Peacemakers was painted, it does a number of important things:

The Peacemakers was and continues to be a widely recognized and important symbol of reunification for a country torn apart by civil conflict.

What is interesting is Healy’s use of design elements to convey these meanings, providing a different translation of high art design elements seen in the work of Civil War artists such as Conrad Wise Chapman, Eastman Johnson, and Winslow Homer, to name a few (askART.com, 2016; Blinkovitz, 2012; McCloud, 1994; Knopf, 2015; Thomson, 1962). Compare it to:

Though not sequential art, The Peacemakers depicts a single moment linked to a longer story, larger events and a broader context, slowing that moment down and allowing viewers to reflect, much the same as the paintings above (McCloud, 1994). The Peacemakers incorporates a subtle fibonacci (golden spiral), a classical design element; For instance, The viewer’s eye follows the arc of the rainbow from the top left hand corner downwards towards the lower 1/3 of the painting where its colours (red, white and blue) continue in the carpet, drawing the eye towards the central figure of an engaged but contemplative Lincoln who is slightly better lit than the other three figures in the painting.

What I think really sets The Peacemakers apart from other paintings (high art) of the era, and likens it more to the American Civil War cartoons/comics, is its creation of meaning through iconography and symbolism, body positioning and character/subject interaction, use of design elements to convey motion and sound, and devices for drawing the viewer into the scene (McCloud, 1994). For instance:

“In this picture I seem to be talking, the others attentively listening… I thought that [Healy] caught the idea from what I told him had occurred when saying that ‘if Lee would only remain in Richmond till I could reach Burkesville, we would have him between our thumb and fingers,’ suiting the action to the word.”  -General W. T. Sherman quoted in Peacemakers (2016)

NEWS WEEKLIES & ‘SPECIAL ARTISTS’
The American Civil War was the first major conflict in world history to be observed by citizens as it unfolded, and this was largely through artwork disseminated via mass media, in particular through weekly illustrated newspapers newly introduced in the North the previous decade such as Frank Leslie’s ‘Illustrated Newspaper’ (launched in 1855) and Fletcher Harper’s ‘Harper’s Weekly: A Journal of Civilization’ (launched in 1857), and the  Southern Illustrated News (1862-1865) and Southern Punch (1963-1865) launched in the South after the outbreak of war (American Civil War, 2016; askART, n.d.; Binkovitz, 2012; Borritt, 1994; Johnson, n.d.; Kent, 2003; Knopf, 2015; Thomson, 1962).

“Many factors contributed to this sudden flowering: the growth of the population and
the news market, the solving of many technological problems by men trained in English
and American picture publishing, and an aroused popular attention to news events of
national concern.  Between 1855 and 1860 the American lithographing and engraving
industries flourished, several illustrated comic weeklies, including Vanity Fair, began
offering their cartoon wares to the public, and most significantly three enterprising
publishers established weekly illustrated newspapers:  Harper’s Weekly, Frank Leslie’s
Illustrated Newspaper, and the New York Illustrated News”. (Thomson, 1962)

A distinct North-South difference can be observed, with greater inclusion of battlefield imagery in the Northern media, compared to the Southern media’s greater focus on personal interaction and satire with little battlefield coverage; This was largely due to differences in access stemming economic resources influencing mass media production and circulation (askART, n.d.).

In the North…
The popularity of these weeklies was fomented by public demand for information regarding enlisted family members, methods of warfare and battle outcomes, and for most of the population this was their first experience with illustrations and cartoons as a medium (askART, n.d.; Binkovitz, 2012; Johnson, n.d.; Kent, 2003; Thomson, 1962). Their popularity was additionally influenced by a new competitiveness within the journalism industry, and political leaders’ realization of the potential for mass media, and visual narrative in particular, to encourage public political support and support for the war effort, as well as for the emancipation proclamation by portraying positive interactions with freed slaves (askART, n.d.; Binkovitz, 2012; Johnson, n.d.; Thomson, 1962).

“Special artists needed to be able to infuse their drawings with a ring of
authenticity,  to persuade the viewer that he too was witnessing real history. The
artist needed to be able  to see the picturesque essentials of the scenes or incidents he
was employed to sketch. He needed  to be a man whose mind was open to broad impressions,
and with the ability to invest bare facts with charm and spirit. The artists didn’t need to
be great colorists, nor first-rate draughtsmen,  but if they were both, it was all the better.
What was absolutely necessary was that they be able  to sketch both rapidly and accurately,
and only few were able to do this. It was also necessary for them to be on hand for the
newsworthy event, to intuitively know when to be where. Obviously this
entailed daring and enterprise, as duty called them to all sorts
of dangerous places.” -HarpWeek quoted in askART (n.d.)

Journalists and artists were present on the battlefield to a degree and for a purpose not seen before, with mail being the typical means of submitting their work to their publishers. Artists included illustrators such as Thomas Nast, and especially high art painters such as Winslow Homer and Arthur Lumley (askART, n.d.; Binkovitz, 2012) — This is a critical consideration, as it represents high art being adapted for new mass media channels and translated into cartoons as a new medium for public consumption (askART.com, 2016; Blinkovitz, 2012; McCloud, 1994; Knopf, 2015; Thomson, 1962).

Some comics archetypes commonly seen today can be identified in this Civil War imagery:

These works were typically uncoloured (i.e. black & white), incorporated visual design elements such as motion lines and representations of sound, and used icons such as Lincoln, other political and war heroes, battleships, weaponry, enemy threat, the North’s moral superiority, as well as depictions of life at home (Knopf, 2015; McCloud, 1994; Thomson, 1962). Though not sequential art in the way that comics typically are, some of these works used panel composition, gutters and transitions to juxtapose unrelated scenes to evoke emotional responses in viewers (especially in contrasting the battlefield with peaceful home life, or difference between abolitionist and anti-abolitionist society), and sometimes for the purposes of glorification (askART, n.d.; Knopf, 2015; McCloud, 1994; Thomson, 1962). Moving beyond objective depictions, these works frequently embodied satire to evoke meaning through exaggeration, and became an important tool for political leaders in encouraging support for he war effort (askART, n.d.; Knopf, 2015; Johnson, n.d.; McCloud, 1994; Thomson, 1962).

“The influence of these artists for Harper’s and other publications cannot be understated.
For example, Thomas Nast, one of the foremost political cartoonists of his time, was a great supporter of Abraham Lincoln and the Union, and Lincoln considered him crucial for
influencing men to join the Northern forces, calling him ‘our best recruiting agent’.
After the war Nast was nationally famous, and his criticism of Andrew Johnson
was a key factor in Ulysses S.Grant winning the presidency.” – askART (n.d.)

In the South…
… the situation was quite different. A major pre-war influence was Edward W. Clay’s ‘Life in Philadelphia‘, which used satire in its cartoons to evoke fear amongst Southerners through depicting how abolitionism and social/racial amalgamation would change everyday life (askART, n.d.; Binkovitz, 2012; Johnson, n.d.; McCloud, 1994; Railton, 2012; Thomson, 1962). The major theme was the threat posed to men’s place and status in Southern society vis-a-vis women, commonly depicting interactions between black men and white women with white males either absent or occupying subordinate or peripheral roles (askART, n.d.; Johnson, n.d.; McCloud, 1994; Thomson, 1962). Some of the illustrations are full colour, adding depth and richness to the portrayal of Southern life.

Though Philadelphia had economic ties to the South before the war, allegiances shifted to the North. With the outbreak of war, Union blockades meant that all media and mail circulation from North to South ceased, and internal economic challenges made it difficult for a homegrown publication to fill this gap. Among these challenges were paper shortages. (askART, n.d.; American Civil war, 2016)

An attempt was made with the establishment of the weekly Southern Illustrated News (1862-1865) and Southern Punch (1963-1865), but with little in the way of resources to support field contributors its content lacked breadth and range (askART, n.d.; American Civil war, 2016). Most imagery comprised character interactions, rather than battlefield coverage, and dealt with themes aimed at lampooning freed slaves and President Lincoln; questioning the freedom of freed slaves in the North (e.g. depicting freed slaves doing menial work for the Union army, interestingly targeted at slaves as an audience); while building support for the Confederate cause through depicting the bravery of Confederate soldiers, demonizing conscription dodgers, and presenting General Robert E. Lee as a hero (askART, n.d.; Binkovitz, 2012; Johnson, n.d.; Thomson, 1962). Even more so than those in the Northern media, these works tended to incorporate design elements and types of archetype use that are recognizable within the contemporary comics medium; Notably, these works were heavily influenced by English political cartoons that had been widely accessible in the South before the war (askART, n.d.; Binkovitz, 2012; Johnson, n.d.; Knopf, 2012; McCloud, 1994; Thomson, 1962)..

Foreign media presence included London Punch (1841-2002) (upon which Southern Punch was modeled), the Illustrated London News (1842-) and Fun (1861-), but, again, there were circulation challenges, and only the Illustrated London News was able to support one artist (Frank Vizatelly) in the field (askART, n.d.; Binkovitz, 2012; Johnson, n.d.; Kent, 2003; Thomson, 1962). These sources offered external perspectives on the Civil War and largely dealt with themes relevant to home, including domestic tensions amongst Britain’s working class who favoured the Union cause vs the British aristocracy whose support tended towards the Confederate cause, played out through the metaphors of abolitionism and amalgamation (askART, n.d.; Binkovitz, 2012; Johnson, n.d.; Kent, 2003; Thomson, 1962).

“Before the turn in the Confederate tide in 1863, Punch took quiet satisfaction in
Union Army setbacks and characterized Lincoln’s Emancipation Proclamation as
nothing more than a ploy in the game of war. After Gettysburg, as the Union Army
moved inexorably toward victory, Punch alternately celebrated England’s
neutrality and attacked Lincoln as a tyrant. Only after the assassination did
Punch express contrition for its attacks on Lincoln’s character
and recognize his achievements.” -HarpWeek quoted in askART (n.d.)

While Sherman’s total war campaign meant that much Confederate work was destroyed, these English cartoons have been preserved (askART, n.d.) In many ways, these seem even closer to contemporary comics in terms of design elements, especially character design that incorporates exaggerated body features, character interaction that evokes meaning aimed at reinforcing white authority, and archetypes for sound and motion (McCloud, 1994).

… I could write a 20,000-word dissertation on this topic alone! I’m such a Civil War history buff (and General William Tecumseh Sherman is totally my Civil War fan girl crush!). But I will stop here.

OK, ONE FINAL TIDBIT…
The US Grant Hotel in San Diego hosted the first ComiCon in 1970, and in 2012 began issuing an annual commemorative comic featuring General Ulysses S. Grant as its superhero main (SanDiego.org, 2012; Staigerwald, 2012).

Boritt, G. S. (1994, Winter). Punch Lincoln: Some thoughts on cartoons in the British Magazine. Journal of the Abraham Lincoln Association. 15(1):1-21. Retrieved from http://quod.lib.umich.edu/j/jala/2629860.0015.103/–punch-lincoln-some-thoughts-on-cartoons-in-the-british?rgn=main;view=fulltext